This kid turned 8 today. Can’t begin to explain how proud I am to be her mom. In anticipation of her upcoming Make-A-Wish trip to Hawaii, we celebrated with a luau!

The party was a success. It started with a ballet class taught by New York City Ballet (check out Lily independently getting her feet into 5th position in the second set of photos) and then the luau at school with pizza, cupcakes, giggles and dancing. Lots of dancing!!! After school we had a play date with her friend Xan, followed by dinner at her favorite restaurant. And then we went home, exhausted, full and happy.

The other day I rushed home from work because I was so curious as to WHO she wrote her first independent letter to.  And then my heart just melted.

How cool is this kid?  She navigated through her pages completely independently and not only did she tell me a silly joke, but she told me she was happy!  Goodness I love her so much.

The next day, she wasn’t feeling so well.  She had a stomachache (which is unfortunately a frequent occurrence even though I do my best to stay on top of her digestive issues) and didn’t have a lot of energy at school.  But still.  This kid wanted to write another letter.   And this one was addressed to… 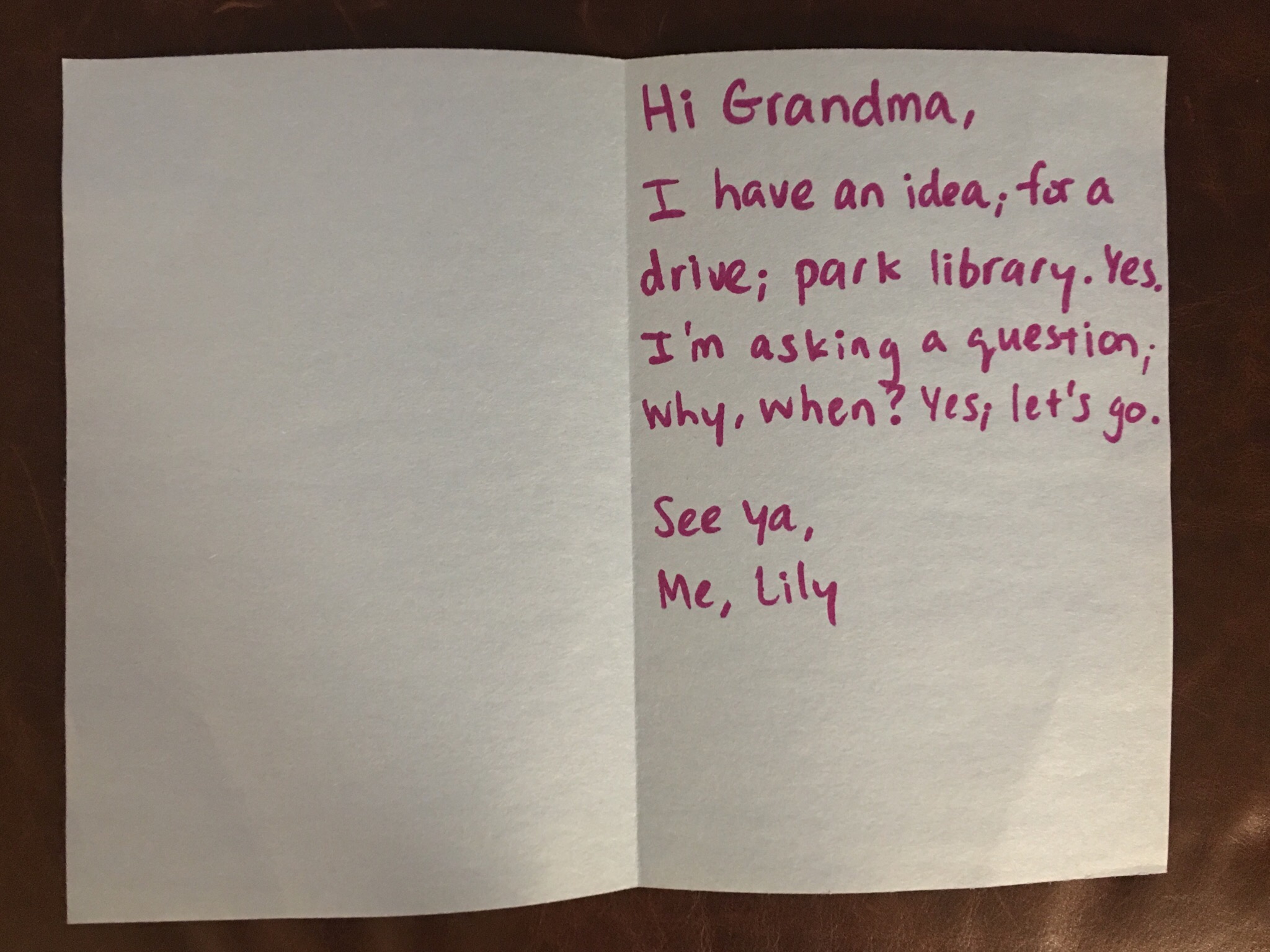 My heart is bursting with pride. Sharing a note Lily’s teacher wrote today along with some pictures…

This kiddo had an amazing day! She’s been very interested in notes and letters (wanting to keep re-reading the notes you send in her lunchbox, very proud of the card she wrote for Christine’s birthday, etc). So yesterday and today we started talking more about letters. We talked about parts of a letter (greeting, body, closing) and Lily helped me sequence a letter that I wrote to Ms. Ariel. She was very into the activity (wanted it to be a secret and a surprise, and asked for “more” when the activity was complete). Then, she worked on her own letter. Christine, we sent it home in her backpack. We were blown away… she wrote it almost completely by herself, with nothing but some verbal prompts (e.g. “don’t forget, a greeting is like a hello…”).  She chose who the letter was for, what she wanted to say, and how she wanted to close out the letter. It was really great practice (writing work and using the Tobii), so I’m sure you’ll be seeing more letters in the upcoming weeks.

Today we also read a few more chapters of Junie B Jones and she was laughing hysterically at the silly parts. In one of the chapters, Junie is sharpening pencils (and attempts to sharpen a crayon in a pencil sharpener, which doesn’t go so well). Lily requested, “my turn,” so I took her to the office to sharpen a pencil. She seemed to think it was great fun! She once again did a fabulous job asking comprehension questions during the read aloud, and seemed very engaged. Once again, she was a total cuddle bunny today. At the end of the day, she kept going back and forth between me and Ariel, squealing, and leaning in for hugs. She also put her arm around each of us at least once, which was so exciting! She was very, very happy this afternoon.

P.S. Lily and I had matching shirts on today, which she seemed to think was pretty funny!

A few weeks ago, Lily lost a tooth and got $5 from the tooth fairy.  She told me and Elaine (her speech therapist) exactly what she wanted to do with this money: buy an orange watch!  You see, she’s learning to tell time, something that she told us that she wanted to do, of her own volition.  A watch is the perfect accompaniment to this activity, no?  She’s so proud of this orange watch.

Earlier today, I got this text from Elaine and it made my heart burst with pride:

It was the most amazing thing watching [Lily] yesterday try and figure out on her own what the clock said… she kept looking at the analogue clock I brought, checking a cheat sheet I made for her and then making selections on the Tobii…  it was so exciting to see!

We are so lucky to have not only the Tobii, but also Elaine – the SLP/AT extraordinaire – to help us communicate with, and challenge this kiddo!