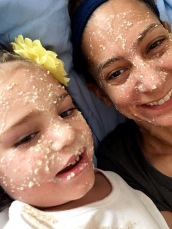 Hopefully this is the last of the spa treatments for the week, a supposedly nourishing mask of oats, yogurt and honey. You see Lily and I spent the past two days in the hospital as she was finishing up the clinical trial on statins for girls with Rett Syndrome. The results will be published in August and it looks promising for some girls.  Thankfully we didn’t have to do a sleepover for this wrap-up but regardless, driving to and from the Bronx on Thursday and Friday was exhausting enough.

On Thursday she only had one ‘spa treatment’ – the breathing study which consisted of attaching 20 leads to her head, three straps around her torso, and one lead on her piggy. The set up wasn’t too difficult and it went rather smoothly. But then we had to sit there for three hours. I had to make sure Lily didn’t move around too much, or fall asleep. It was physically demanding for us both. We made the most of it – watched a few movies, read a few stories, and I even managed to give her a real spa treatment – a pedicure!

Afterwards I took her for a celebratory lunch and a stroll at the Bronx Botanical Gardens. Mommy had a glass of wine while Lily socialized with the other diners. 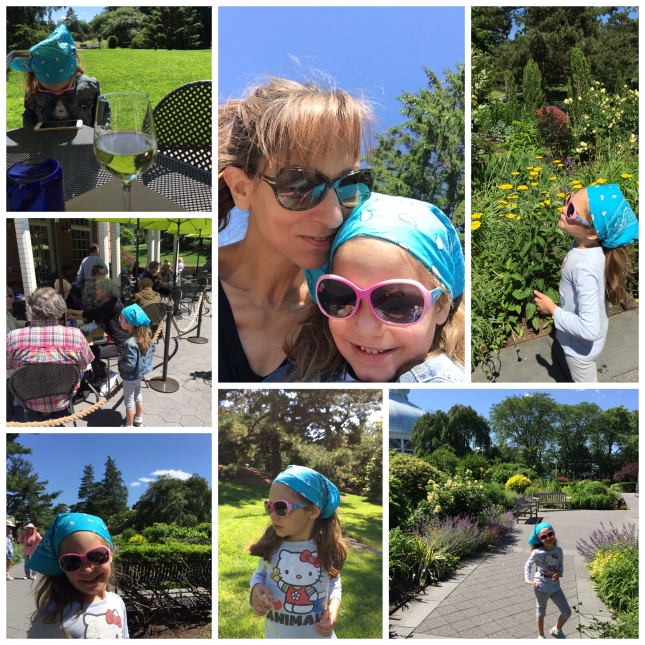 Friday we were back at the hospital bright and early. Lots of ‘spa treatments’ this day.  She started out with a blood draw. Brave kid didn’t even flinch when the phlebotomist put the needle in. Then we had an hour-long session with Dr. Sasha to talk about Lily’s emerging anxiety, her increased clumsiness, and her ongoing sleep issues. What many people don’t know about Rett Syndrome is that it is continuous and relentless. And my poor sweetie is struggling a lot.

After talking to Dr. Sasha and having Lily do a cognitive test (which thankfully was not at all invasive), we made our way down to the dungeon for the EEG.

The test itself was only 20 minutes long. But it took over an hour to get all 27 leads on her head. The technician was an amateur. However, Lily was a champ throughout. We were giggling and telling stories and listening to music. I told her I would take her to the zoo afterwards if she wanted. But she was so tired after the EEG that we just made our way home. 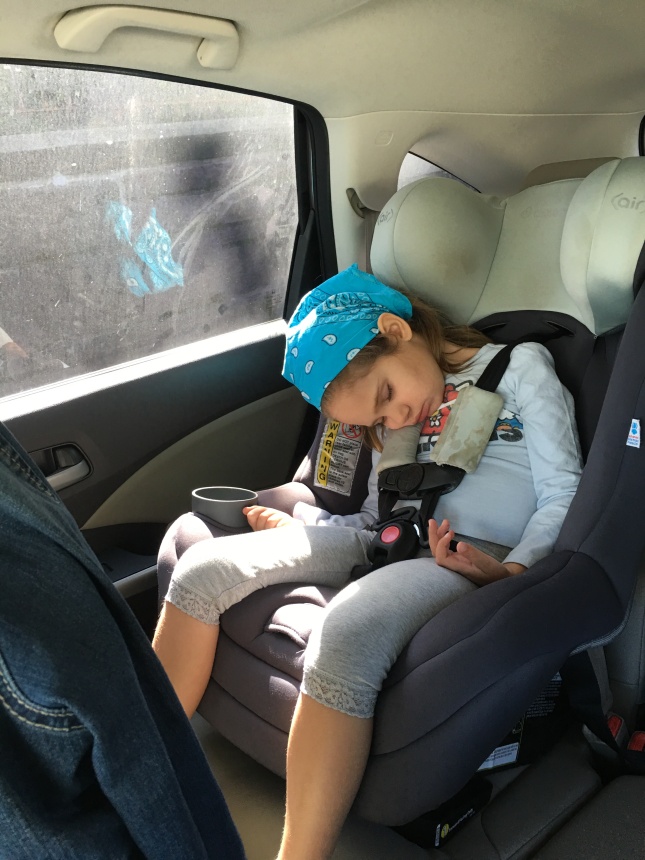 Once we got home, she had a few therapy sessions (she needed help with movement after being sedentary for such long periods of time). We had pizza for dinner. It was pizza Friday after all! However her appetite just wasn’t there. She managed to eat a few bites. Then she took an hour long bath, soaking the hospital visit out of her pores while mommy cleaned –  yet again – the glue out of her hair.

We spent the rest of the evening cuddling in mommy’s bed watching Mary Poppins. It was a struggle to get her to fall asleep (which is unfortunately the norm), but eventually she did and she slept through the night!

When she woke this morning, she had an angry looking rash all over her sweet face. I’m sure it’s all the tape and glue and alcohol and leads that has aggravated her skin. I have to go to the pharmacy later to pick up some calamine lotion because my at-home spa treatment did nothing for her.

And there’s another reason to go to the pharmacy today – I’m picking up her latest sleep medication. Hopefully this one will work. Us girls need our beauty rest, especially after this past week.

A few months back, Lily and I were invited by her dad’s family to see a special ballet performance geared towards children with disabilities up in Connecticut.  Lily had a ball.  And as you will see (and hear – yup, that’s her yelping THROUGHOUT the clip), this kid had a GREAT time.

(Hopefully you can view the video.  For some reason, some browsers only show a picture, and not a link to the video.  Ping me if you can’t access it.)

The ever talented Suzanne Fiore came over the other week and beautifully captured a Saturday afternoon of Lily time.

Click here to see more of the beautiful photos Suzanne took and read about a day in the life with Lily.  And please feel free to share with your own social networks.  #CureRett. 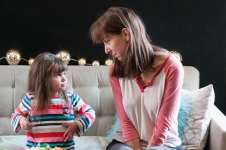 A busy mom living in Manhattan, working full time in a job that I love and raising my sweet L - the funniest, hardest working, smartest, prettiest, bravest 8-year old out there, who happens to have a genetic disorder called Rett Syndrome. This site is for family and friends to follow us on our journey of health, happiness and the occasional hospital visit. For more photos and updates, follow us at @c_m_salerno on Twitter and salernochristine on Instagram.