I did not want to be a mommy today.  Today I wanted to sleep in, sip my coffee while reading a book and maybe go for a run in Prospect Park.  But that’s not how life works, is it?

Instead, my alarm clock (i.e., Lily) woke me up at 5.45am, on a Saturday.  I shuffled into her room half asleep and put the computer on her bed for her to watch a movie so I could shuffle back into my bedroom to snooze a bit more.  Don’t judge.  And if you are judging, don’t worry.  It didn’t work.  Lily watched her movie for about 15 minutes and then scooted out of her bed and came looking for me.  Of course I obliged.

She then yelled at me for a good 5 minutes while I was i the kitchen preparing her morning smoothie.  I wasn’t going fast enough for her (as usual)…

Finally after two large bottles full of smoothie, she cracked a bit of a smile.  She’s a temperamental one in the mornings…

Anyway, we had a LOT of time on our hands and so I decided to do a Home Depot run.  I figured it would be relatively empty given that it was 7.30 on a Saturday morning.  I was mistaken.  But thankfully she was a trooper and we found blue flowers!!! to plant in our container garden and a few other things.

When we got home, I unpacked the car.  Living on the second floor of a walk-up has its downside; hauling bags of soil, dozens of flowers, a ginormous package of paper towels and a 33 lb kid up that flight of steps was exhausting.

Once we got settled in, we went out to the patio and she helped me pick rosemary so I could start preparing her lunch: rosemary chicken with fingerling potatoes and rainbow chard.

Around 10am, Lily looked sleepy so I put her down for a nap.  I should have put myself down too but instead I did some major gardening.  I was inspired by my child, who last week told two different people (via the Tobii) that she wants to plant blue flowers on the patio!!!!  Dammit there were going to be blue flowers!

Just as I was about to take a break from gardening to nap, Lily woke up.  It was getting close to lunch time anyway.  And her occupational therapist Katherine was going to be there soon (she was doing a make-up session).

While Katherine worked with Lily, I did more gardening.  I was on a mission.  And once Katherine left, I had Lily help me plant the last of the blue flowers. 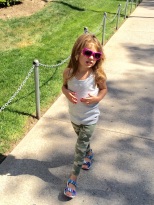 Anyway – all of this to say: it was a long and tiring day (a lot of it was self-inflicted I realize) and regardless of the exhaustion and not wanting to be a mommy, I still managed to have a fun time with my kid.  She’s just so cool.

One thought on “Teeth grinding, spitting and yelling oh my…”