Holy shit.  And I mean shit.  (Sorry for those of you who are faint of heart.)

I thought getting a cat (not a kitten, but a full grown cat who is friendly and warm) would be a great companion for me and for Lily.  So we tried it out.

No, no!  He didn’t die.  I just returned him.  You see, I had agreed with the woman who gave/lent him to me that I would foster him for a while to see if it would work.

It most definitely did not.

Why is this cat sounding more like an article of clothing rather than an animal?  I’m really not that heartless.  Believe me.  It wasn’t an easy decision to make, at first.

It clawed around in my head the first few nights (as he clawed my sofa and rugs)… maybe I wasn’t up for this?  Maybe a cat isn’t as low maintenance as I thought?

But then I’d think… he’s so SWEET.  Look at him, licking my face (ick) and rubbing up against my legs (as I’d trip over him walking down the hall to make my morning coffee).  The woman who gave him to me was right; he does act more like a dog than a cat.

And then I’d come home from a long day at the office to find kitty litter all over the apartment. I’d be down on my hands and knees cleaning up after him, muttering that this is not how I want to be spending my free time (like I have any free time!).

But then I’d look at him and say… he’s so SOFT!  And it’s so nice to have a soft, sweet little guy around to keep me company when Lily’s not home with me.

What finally made my decision an easy one was this: Kitty has IBS.  Like major diarrhea ALL THE TIME.  And it just so happened that a few times, L and Kitty decided to poop within a few minutes of each other.  I’d be finishing up cleaning one mess just to have another await me.  (At least L wears a diaper so it is somewhat contained.)

So bye-bye Mr. Kitty.  I won’t miss you licking my face in the middle of the night.  And Lily probably won’t even notice you’re gone. 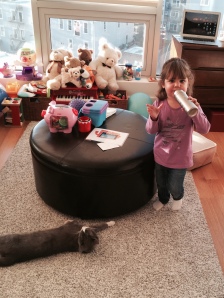 This was about as close to Kitty that Lily wanted to get.

3 thoughts on “Retts and pets? Not in this household.”