My soul is hurting this week.

I’m still fighting for basic Medicaid services (like diapers, overnight respite, daytime respite) while trying to prepare (and not completely flip out) for Lily starting kindergarten next month.

I’ve had to postpone our move to the Upper West Side which means she will be in for quite a bus ride to and from school. So I need to make sure it’s as comfortable, and as safe, as possible. I’ve already gotten a doctors note requesting what must happen but trying to find the right person within the DOE to make this a reality is proving impossible.

Good news is that I’ve averted the ‘adaptive stroller’ issue for the bus but that was a research project and fight in its own right. And the fight is only half over.

There’s always so much to do. The lists I have written down, and in my head, are endless.  So the idea of moving while all this is going on (and I’m not even adding the to-do’s from my job) makes my head reel.

At the top of these lists (other than bussing and Medicaid) is to get her new school up to speed with her abilities, and needs (they’ve never had a Rett sweetie nor do they have experience with the Tobii), get Lily acclimated to a new school with new kids and new teachers, find a few new home-based therapists to replace those that fall off after pre-k (hint: this is not easy), and remind myself that it is all going to work out. Deep breaths.

I wish I could say that Lily’s sleep has stabilized but that would be a lie. And the panic attacks, though less frequent for now, are still happening.

The upside? Lily is keeping me laughing with her silly antics. Yesterday she kept pulling down her Peppa Pig artwork from the wall. Shamekia the nanny initially thought it was an accident so kept pinning it back up. But after the third time she found it on the floor, she asked Lily ‘you don’t like Peppa Pig today?’ And Lily scrunched up her face in a recognizable look of disgust, which means ‘no.’  And then she giggled about it.

Why my child doesn’t like Peppa Pig all of a sudden is still unknown to us. But I love that she is always finding new ways to let us know what she likes, and doesn’t like.

If we (meaning me, Shamekia and/or her therapists) figure out why Peppa has turned into persona non grata, I will let you know. But for now, I will leave you with a visual of my kid admiring her art wall sans Peppa from earlier today. 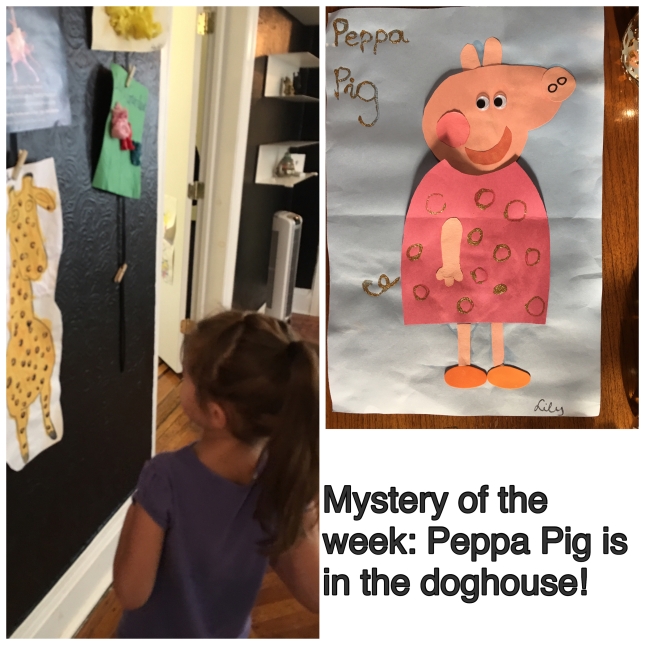 4 thoughts on “The to-do lists are endless”