Was anyone else aware that on top of all the more well-known symptoms of Rett Syndrome (like loss of language, physical disabilities, breathing problems, severe anxiety, sleep disorders), there are so many lesser known ones, like excessive tartar buildup?  Yup, my kid has that too.  So what does it mean?  We go to the dentist every 6 weeks for a cleaning.

Thankfully we’ve found a wonderful dentist who puts Lily completely at ease.  For example, the last time we were there for a cleaning, we had to get her two bottom front teeth pulled (her baby teeth had popped up behind them and were there for a while).  This kid didn’t cry once – not when they gave her the novocaine.  Not even when they pulled her teeth.  I cried.  But not her.

Earlier that morning, I explained to her what was going to happen.  And I told her that if we put her two baby teeth under her pillow, the tooth fairy will come.  She became very excited.

That evening, she and one of her therapists had a conversation about it and they wrote a letter to the tooth fairy.  All the words underlined were her exact words on the Tobii.  The tooth fairy found it when she was picking up her baby teeth and putting money under her pillow. And it made this tooth fairy extremely proud!!! 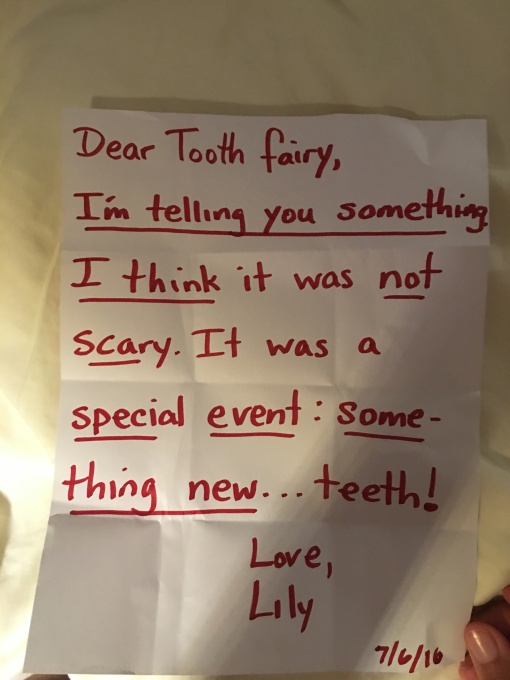 5 thoughts on “A visit from the tooth fairy”